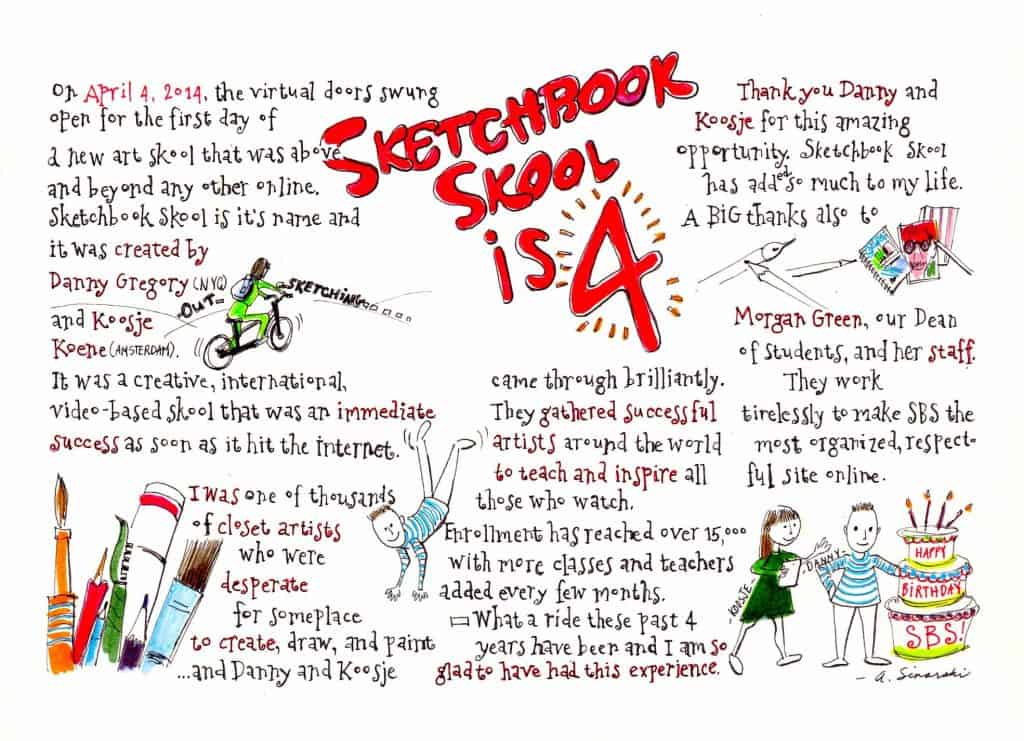 Interview: The History of Sketchbook Skool

I learned about Sketchbook Skool from my mother who is a student, and I did as much research as I could in the months that followed about the teachers and the skool. Yet there were still things I didn’t know. In honor of the skool’s 4th anniversary (it was April 4th!), I asked the founders, Koosje Koene and Danny Gregory, for an interview to answer some questions I couldn’t satisfy on Google:
— Amanda Rentschler, Provost of Posts

Q: Danny, you’re in NYC. Koosje, you’re in Amsterdam. How did the two of you connect?
K: Danny was visiting Amsterdam for a speaking gig and posted a call for sketchers on his blog. I was teaching online art classes at the time and a bunch of my students mentioned the blog and encouraged me to reach out to Danny.

D: I was a big fan of her work and was intrigued that she was offering online art classes. When I was in Amsterdam, we got together for coffee in person and few months later, Sketchbook Skool was born!

Q: Were either of you working artists at the time the Skool was born?
K: I was just starting out as an illustrator and teaching online classes on drawing techniques.

D: I had just left my job as an executive creative director in advertising in NYC to move to Los Angeles. I was writing a couple of books, doing some freelance work, and painting.

Q: What made you want to start Sketchbook Skool?
K: We both felt the need to learn from artists we admire. We wanted to know how they do what they do, what the inside of their studio looks like, what role art plays in their lives? The art classes we could find online were limited to techniques, or it was one approach from one teacher, which felt limiting at times. That’s why we came up with multi-teacher kourses, in which you get to learn from many people in just a few weeks time.

D: I had done a few in-person workshops with 25-50 people had discovered how many people wanted to be more creative but were blocked in one way or another. While the workshops were fun, they also took a lot of preparation for a one-time small event. I wanted to figure out how to bottle that experience and share it online. I also wanted to use my thirty years of experience in making television commercials to create high quality videos about art. And last and certainly not least, I really love working with Koosje — she’s the best creative partner I’ve ever had and we have lots of fun creating and developing Sketchbook Skool.

Q: When your first kourse launched, were you confident that it would catch on, or were there nerves?
K: We didn’t really think about it as a business. It was a fun, creative project that we collaborated on. Little did we know that so many people had the same craving for inspiration as we had.

D: We had very low expectations. We basically made a course with a few friends and thought it would maybe be of interest to a hundred people or so. But when we maxed out enrollment at 2,000 students, we were shocked – and delighted.

Q: What has been your favorite kourse you’ve produced so far?
K: It might be our latest kourse, “A Zillion Ways To Fill Your Sketchbook“. It’s like a big fat encyclopedia that celebrates the art of sketchbooking. This kourse reflects what Sketchbook Skool is all about

Q: How would you like to see the skool grow in the next four years?
K: We love our growing community made up of so many loyal students who encourage each other in their creative journey. We hope to grow that community even more.

D: Our next big step is the launch of SketchKon, our first live convention, in Pasadena Nov 2-4 (to be officially announced soon). If it goes well, we would like to make it an annual event and also expand it to Europe. We are also talking to a few publishers about launching our first Sketchbook Skool books. And of course, we want to continue meeting new artists and making new kourses. We have a bunch more planned for this year, on different themes and of different lengths.

Q: What is one of the biggest things Sketchbook Skool has taught you?
K: How important community is to grow your creativity, keep you motivated, and always learning. For us too. Thanks to our community, we’ve made some of our most successful kourses – just by listening to what people need and ask for.

D: So, so much. I agree with Koosje, and also I believe we’ve learned the importance of balancing both consistency and creativity – Consistently making klasses that are familiar, but also having the latitude to branch out, try new things and teach new things in new ways. Some things have worked amazingly, some haven’t worked as well. It’s all good, all part of the trip we are on.

When we started SBS, we had no idea where it would go. We had no idea we’d have such an amazing staff that are like our creative family, that we would have such a devoted community, that our fakulty would be so wide-spread and passionate, that this would go from a side project to a successful enterprise. It’s amazing and we are so grateful for all the fun we’re having. We both say it all the time: this is the best job we’ve ever had!

This concludes our interview! I hope you learned something new, too. Happy Birthday Sketchbook Skool! 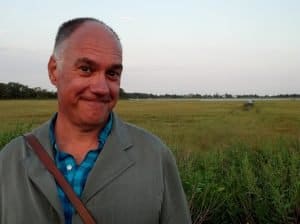 A radio interview with Danny Gregory 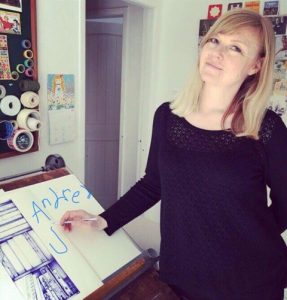 Interview: Andrea Joseph – For The Love Of It

Check out JJ Gregory’s chat with Andrea Joseph about ballpoint pens (of course!), new ways to challenge yourself, and how she’s found even more things 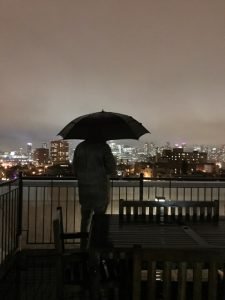 JJ Gregory chatted with Jonathan Twingley about happy accidents, the importance of being present, and the popularity of sketchbooking during this digital age. Q: I’ve