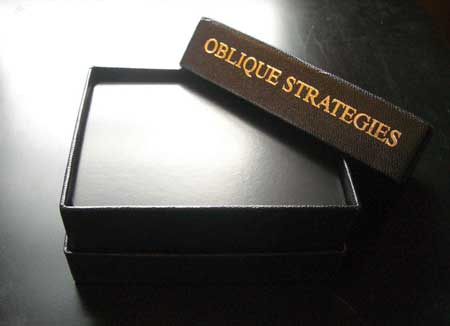 With an exciting new course coming up, we have been stretching our brains when it comes to new challenges and new content, as well as how to jazz up what we currently do for this community and how we can make it better. For those of you who have been returning to your sketchbooks daily, weekly, or even monthly, the concept of limbering ourselves up to move in new directions is paramount to expanding our creativity and really growing as people and as artists.

Creativity isn’t something to be learned or earned, but something that just needs to be nurtured. So how do you foster creative growth when you feel like you’ve hit a slump, or a are stuck in a box? Or how do you revive it once you feel like it’s been lost? Danny Gregory made a little film awhile back about a friend of his named Moby, called Oblique Strategies. In it, he talks about Moby’s creative process and that of another musician and composer named Brian Eno. In another blogpost, Danny writes about Eno, and his Oblique Strategies as a bit of a game or challenge he issues himself in order to break out of his usual creative patterns. To do this, he created a deck of cards with different rules and challenges and used these to guide his music making. For Moby, this meant placing himself in a completely different environment (an old recording studio from the 1970s in his case) with a new set of rules that dictated how he could produce his music.

For these two musical masterminds, creating rules and challenges gives them the space to try new things they wouldn’t otherwise attempt. For us at Sketchbook Skool, we need to stretch in order to venture into unknown territory in our sketchbooks. Whether it means forcing yourself to work with a medium you hate, or giving yourself rules to adhere to like only drawing horizontal lines to depict a subject, use the concept of oblique boundaries to help you break out of your old ways and into something refreshing. Like in yoga poses, even when you return to whatever way you moved before, chances are you will see it and feel it in a different way after having experienced a new “stretch”.