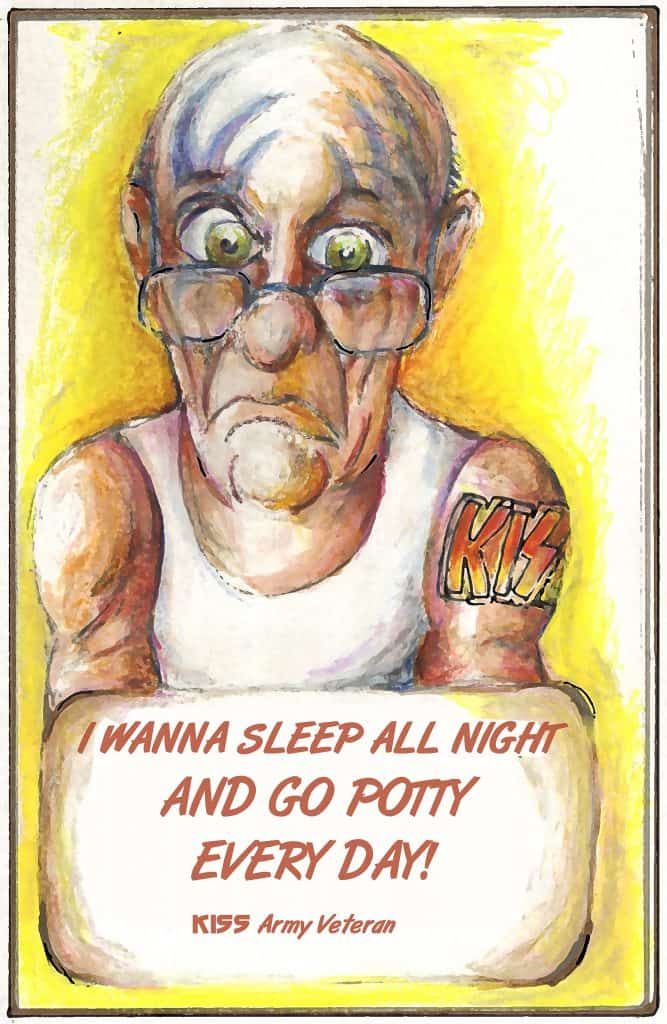 John Bloner has been a student at Sketchbook Skool since 2016. When it comes to using humor in art, John’s art is chock full of laughs. He brings a lot of light and fun to our community as well as his local community of artists in Kenosha, Wisconsin. Check out his art and commentary below!

What becomes of members of the KISS Army when we’re collecting Medicare payments and going to bed at 9pm? Needs and desires change as we grow older. Our KISS makeup begins to fade and we only stick out our tongues when our doctors ask us.

I created this piece, Champagne Harlow, for a zine, where each contribution focused on a song or songwriter. Champagne Harlow, according to composer William Basinski, was, in his words, “the punk rock goddess of Denton (Texas) in ’78.” He writes, “She was brilliant: tall, platinum blonde, blue-eyed, thin, and knew everything about Warhol, Interview magazine and New York.” She walked her lavender-colored cat on a leash. My Texas-born friend, Brent Mitchell, immortalized her in song: “Champagne Harlow smoked her Delicados/in a Pontiac Catalina/You’d know her if you’d seen her,” he purrs in his honeyed-Texas tenor.

In the run-up to SketchKon, Morgan Green challenged me to draw images of all of the event’s presenters. I accepted before I counted the number of artists who were listed on the SketchKon website. “Holy cow,” I said. (Actually I said something else, but this is a family-friendly zine.) The biggest challenge was in using my imagination to determine height of the artists (I seriously underestimated Brian Butler’s tallness) and their apparel (I placed Andrea Joseph in a dress, which her friends found hilarious, since she does not own one.) I hope I came closer to representing these four Sketchbook heroes: Jane LaFazio, Veronica Lawlor, Melanie Reim, and Lapin.

Once a month, my artsy friends and I get together to make art that I assemble into a zine that is tied to a specific theme. For one issue, our theme was Ginger. I depicted the red-haired girl Tami Erin, star of the 1988 film, the New Adventures of Pippi Longstocking, in two drawings: one that depicted her as an 11 year old, and another as an adult. Like many other child stars, Tami found trouble in adulthood, including assault, hit-and-run, and a DUI. She also starred in a porn flick. Fortunately, she seems to have cleared up her life since one unfortunate year. She’s served as a UN Ambassador for UNICEF and has been lauded for her humanitarian efforts. Perhaps I need to make a third drawing to reflect her more recent accomplishments.

This sketchbook piece was the first of a series of improv-drawings, inspired by the art-making methods of printmaker David S. Driesbach. I began without any forethought of composition, color, or theme by sketching the fellow in the blue hat whose left arm has become a rose stem and continuing with putting down other flights-of-fancy. Those who know me well may recognize certain characters and motifs that found their way onto the page. The title is something that my late father-in-law, Bud, told me decades ago.

John credits his 5th grade teacher for feeding his interest in art when she allowed him to draw his class assignments rather than writing them down. He spent most of his youth with a pencil in hand, drawing automobiles, real and imagined. In adulthood, he typically draws curmudgeonly men. Once in a while, he will put a wig on one of these creatures and say that the old fellow in a drawing has found a wife. The illustrations of Charles Bragg and Rien Poortvliet have had an enormous influence on him. He resides in Kenosha, Wisconsin USA with his wife, Roberta, and daughter, Annie, where he recently retired after many years of employment in local government. He describes retirement as “Da Bomb!” 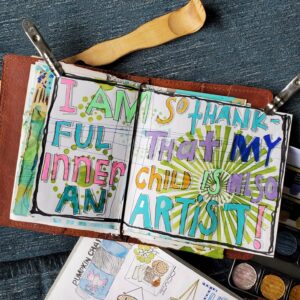