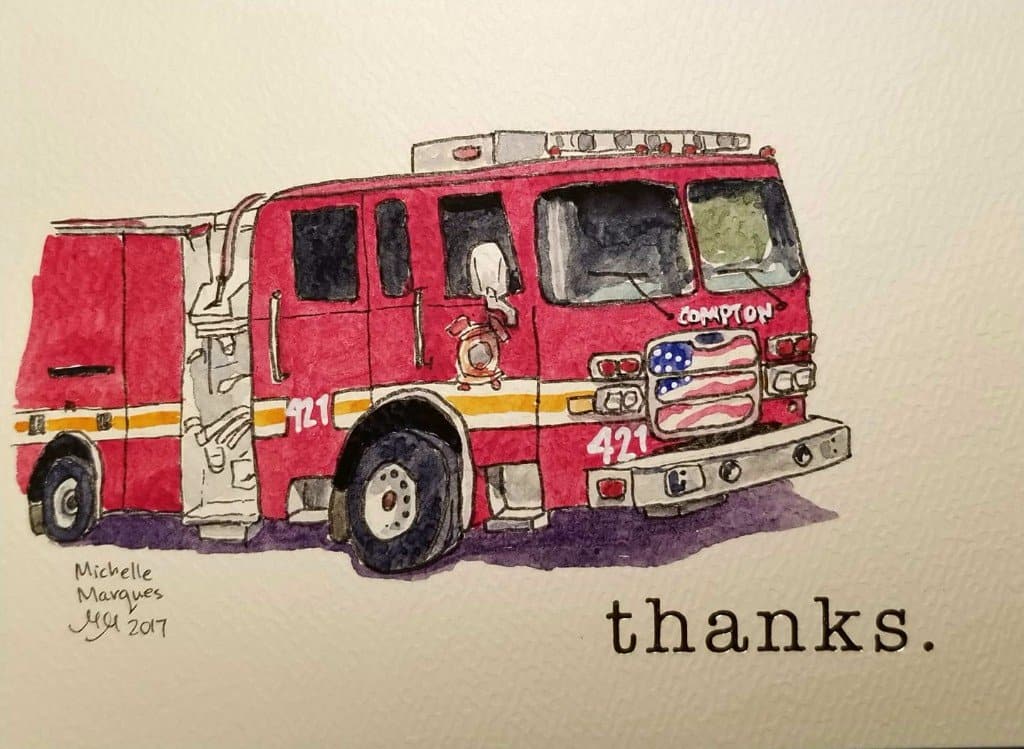 Outside of the Klassroom: Sketchbook Skool Student Thanks Heroes

One of the best parts about Sketchbook Skool is the community. Fakulty and students alike are constantly sharing their art with each other and when that reaches beyond the klassroom, well we think that’s even better.

In one of our newest kourses, Let’s Make Greeting Cards, there has been no shortage of fun, inspiring and thoughtful art floating around. We love this story of one student’s effort to show appreciation to the first responders supporting her community and are thankful for this platform to share her story.

I live in Santa Rosa, California. On October 8th, a fire started 20 miles away; within hours, it swept through our town, burning entire neighborhoods to the ground and killing dozens of people. I work for a local radio station and I immediately went in to report on the fires. (I was actually watching Stefan’s klass in Imagining late that night when I smelled strong smoke and got a text from my coworker about coming in to cover the news.) I spent a long week and a half on the airwaves.

About nine days into the fires, I was sitting on my Vespa scooter at a stop light when I saw a string of fire engines heading down the street, returning from a day on the fire lines. They were all from out of town, and I noticed that one was from Compton, California. I waved at them and decided I would send a thank you card.

Sonoma County received assistance from literally hundreds of response agencies from 17 states and two countries (Canada and Australia). A local resident compiled a list of addresses to send cards to, and a lot of us in Sonoma County have been writing cards.

I used a card that had just the simple word “thanks” embossed on the front and drew a picture of the Compton fire engine. It’s a small thing to write or make a card, but I wanted to express my deep gratitude to this fire crew who came from so far away to our rescue. — Michelle Marques