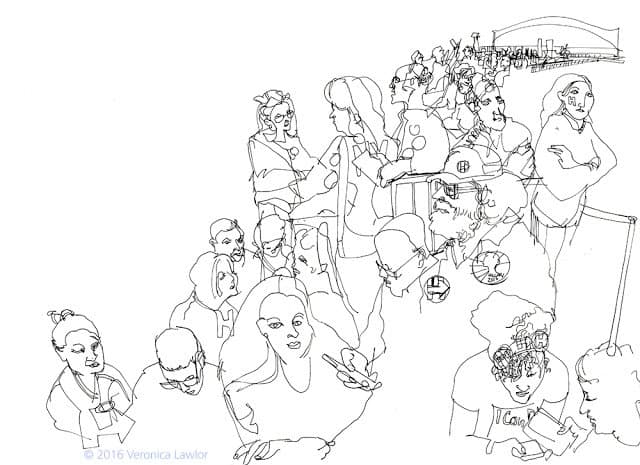 Sketchbook Skool fakulty members Melanie Reim and Veronica Lawlor are well known for their skills in reportage–on-the-spot sketches of people and scenes captured in loose but evocative art. Last Tuesday offered a prime opportunity for practicing their reportage skills. As voters turned out for this historic election, the artists took to the streets (after voting, of course) and New York City’s Javits Center convention hall.

Here are their sketches, and their comments

Melanie: The order of the day was to travel with small bags, or none at all. Accordingly, I had my Pelikan fountain pen, a few graphite and colored pencils, and a couple of brush pens. All of my drawings were made with those materials.

Veronica: It was a challenge to bring a selection of materials without a bag larger than a small purse! I brought my Hero fountain pen, a few brush pens, and some graphite and colored pencils. I chose colors based on what I thought would be important symbolically, blue and red, and added a few small crayons to my bag as well as a water brush.

Melanie: Though we were waiting on line, we did keep moving forward every 10-15 minutes. During that time, alternately sitting and standing, the drawings were made very quickly. There was so much to capture. Documenting the immediacy of it all, and giving the feeling of being there, was paramount, as it always is, though the content of conversation and anticipation of the event was extraordinary.

Veronica: Not much time to linger! As I moved and drew, I also kept in mind to change my viewpoint: at times pulling back to give the feeling of the overall scene and at other times moving in close on a person or people, to convey both the personal and the public.

Melanie: As day turned to night and anticipation to shock, there was an overabundance of body language and expression to record.

Veronica: The body language and expressions of the people were very important to the story. I also thought about the graphic mood of my materials; early on, when Clinton’s supporters were so hopeful, I wanted that crisp, clean line of the ink pen. As the tide shifted and the mood grew somber, I found myself reaching more for the soft sensitivity and texture of the graphite.

Veronica Lawlor teaches drawing and illustration at Pratt Institute, Parsons, the New School for Design, and Dalvero Academy. She is the author of One Drawing A Day: A Six-Week Course Exploring Creativity With Illustration and Mixed Media. Veronica teaches a klass in the Sketchbook Skool kourse Storytelling, and she’ll have a future SBS kourse that will be announced soon. Learn more about Veronica at veronicalawlor.com and studio1482.com.

Melanie Reim is an award-winning illustrator who earned her MFA in illustration from Syracuse University. She has done illustrations for book publishers, ad agencies, museums, magazines, and corporations. Melanie is a professor and chair of the MFA in illustration program at the Fashion Institute of Technology in New York City. She is also a featured teacher in Storytelling. See more of Melanie’s work on her blog, sketchbookseduction.

Helpful drawing tips in just a few minutes with Koosje Koene. Improve your skills and break out those art supplies, join us to learn drawing 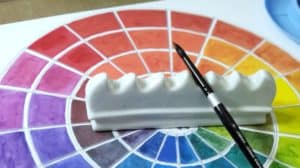 Color Theory Demystified: Adjust Your Color Settings to Capture Anything

Color theory is the science behind visual harmony in your paintings or drawings. The right color settings help capture the time and scene, ensuring nothing