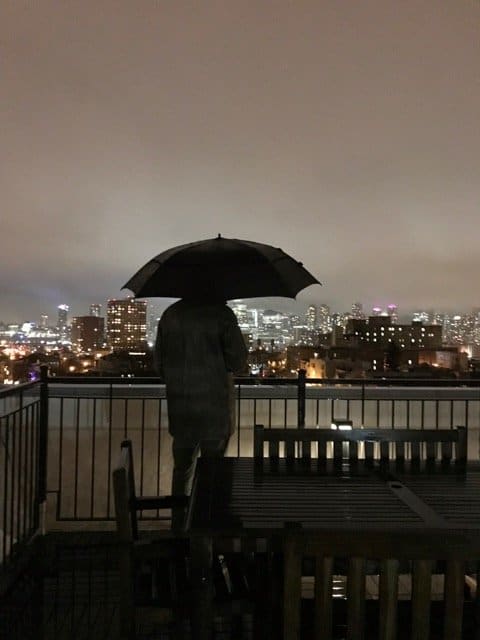 JJ Gregory chatted with Jonathan Twingley about happy accidents, the importance of being present, and the popularity of sketchbooking during this digital age.

Q: I’ve just finished watching your Sketchbook Skool klass again and it is so full of pearls of wisdom that I hardly know where to start! One of my absolute favorite things you say is that “A sketchbook, by its very nature, is freedom, a place beyond expectations where accidents ought to be encouraged in the pursuit of discovery.” I think that idea of total freedom and permissiveness is a thing all artists need to hear regularly. Do you have an example of a great art accident that has happened to you because of this belief?

A: A big part of the attraction to drawing – and drawing in a sketchbook, specifically – is the directness of the action. Whether it’s an observational drawing or a fantasy from the imagination, committing a series of marks to a blank page puts you in the Moment, implicitly. It’s happening right there in your lap. If you’re paying attention there’s no way you CAN’T learn something each time you sit down to make a drawing. In so many ways, almost every drawing or painting I’ve ever made is some kind of loosely controlled accident. That’s the maddening part of it all, and the part that always keeps me coming back for more.

Q: Your work is so beautifully influenced by music, literature, poetry and philosophy. I love that you tell students to take in all the raw materials they can possibly pour into their heads and then once that info is in there “Don’t think!” as you apply it to making art. Can you elaborate?

A: Well, ART isn’t really about ART in the end, is it? It’s not a wall, it’s a window into the world around us and that world we can’t see with our eyes. I’ve always contended that the study of Art – the visual arts or literature or music – ought to be the most rigorous course of study at any university or college because Art is potentially about everything that it is to be alive – science and biology and psychology and mathematics and astronomy and astrology (yes, even ASTROLOGY, didn’t you know that Art is partly about astrology, even/why not?!) and history and marketing and business and sports (I’ve always thought that sports and Art are very much related but that’s a separate conversation altogether) and etc etc etc. So yes, it is critically important to THINK INTENSELY about a lot of things and pour as much as you can into yourself, but then at the same time to trust instinct and intuition to play a role in guiding your pen because that part of our brains that dreams is such a powerful tool if you can tap into it while you’re wide awake. A lot of time that’s what drawing in a sketchbook can feel like: Lucid dreams.

Q: In your klass you reference a quote that Charles Bukowski famously said which is: “To do a dull thing with style-now that’s what I call art.” What does that mean to you?

A: There ought to be a sub-quote or footnote attached to that quote that says: “There is very much such a thing as Bad Art or Boring Art or Boring People.” Just because somebody calls themselves an “Artist” doesn’t mean anything. I think that a big part of why I like that quote and Bukowski as a poet (though it’s a very Cool Kid/campy thing to admit) is that Bukowski couldn’t’ve cared less what other poets or the Literary Establishment thought about him and the mountains of pages he typed every night or even if the stuff he churned out was “poetry” at all. He HAD to do it, like breathing. “Style” is such a stupid-loaded word. What if we replaced that sentiment here with “nobly.” How would that sentence strike you now? “To do a dull thing nobly – now that’s what I call art.” (From Webster: “nobly: 1 With noble courage or spirit; gallantly 2 a) idealistically; loftily b) excellently; splendidly 3 with noble heritage”.)

Q: You admit that you have a fondness for art supplies and materials that are a little hard to control. You also advise students to go to the hardware store instead of the art store to see what they can find there to work with. That sounds pretty fun. Have you been letting go with anything new lately?

A: Ultimately it’s not so much about WHERE you find your tools, but rather that you figure out strategies to get out of your own way. The ironic danger about acquiring any level of skill or proficiency with something is that you’re increasingly susceptible to being cute or self-consciously clever with what it is that you’re doing. One could probably come up with a mathematical equation proving as much, that with increased dexterity comes an equally increased susceptibility to playing games with yourself and your audience (if you have one). Using a tool that you can’t quite control is a simple way to encourage yourself to be as direct as possible with what it is that you’re trying to say.

Q: It has been postulated and you have previously commented on the possibility that the recent popularity of sketch-booking may be a direct and/or subconscious reaction to the frenetic + digital reality that we are all living in. Tell me a bit more about that.

A: Yeah, it’s no surprise that as we’ve signed up to be totally digitized in every single aspect of our personal and professional lives, a few of us might find some small comfort in re-discovering the analog, measuring out our hours and days with coffee spoons, as T.S. Eliot said. I’ve never been able to figure the world out. The Virtual World we live in now even less so. A drawing in a sketchbook, while a squirrelly thing, I can deal with that, I can get to the bottom of that. Without a pen and paper to see what I think about something though, I’m usually more or less at a significant loss.

Q: You expanded on a beautiful quote by Robert Frost in your klass. It always stuck with me. Robert Frost said, “No surprise in the writer, no surprise in the reader.” You said, “Making a drawing in a sketchbook is a little bit like being the writer and the reader at the same time.” That’s just so perfect. I don’t know if I really have a question about that. I just wanted to tell you it made a deep impression on me!

A: Robert Frost made a deep impression on me a long time ago.

Jonathan Twingley’s drawings and paintings have been published by the New York Times, the Los Angeles Times, the Washington Post, the Chronicle of Higher Education, the Boston Globe, the Atlantic and the New Republic, among many others. In 2007 he accepted a position as Senior Lecturer at the University of the Arts in Philadelphia. In 2009 Scribner published his debut illustrated novel, THE BADLANDS SALOON. He lives and works in Jersey City, New Jersey. (Visit www.twingley.com for a portfolio of his work. His Instagram account (@jontwingley) is dedicated specifically to his work in sketchbooks.)