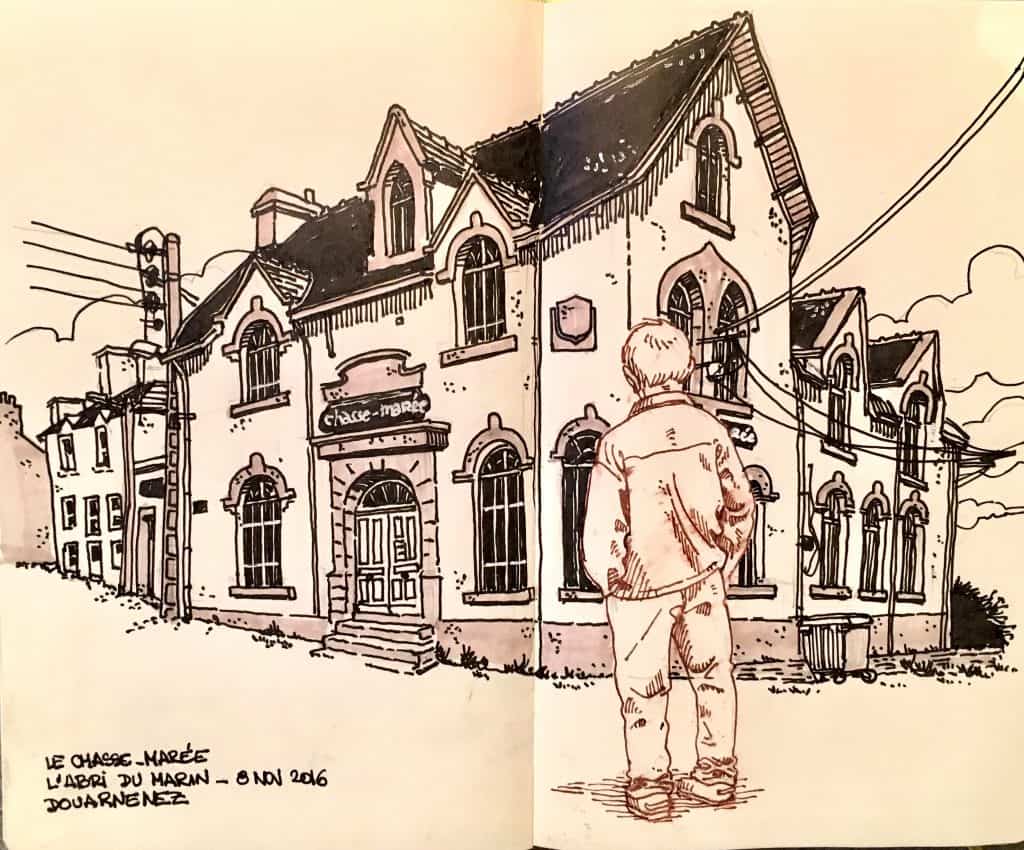 I’m in public transportation amidst people who seem exhausted after a hard day of work. Why wouldn’t they, after all? Contemporary life isn’t always easy when you try to keep pace all day long with a never-ending flow of emails, Key Performance Indicators reddening, alarming news from the media, globalization on its way, the Digital Revolution…you know it all.

The night is falling on Paris, the city of light, but I’m elsewhere…I’m drifting away, browsing on my iPhone (free product plug), my summer vacation photos in Brittany, looking for inspiration for tonight’s drawing. Drawing is my daily therapy, the best way I’ve found to escape from the day-to-day hardness of this world. It is my safety valve to release the day’s work pressure.

Over time, I became a schizophrenic guy trying to cope with two lives at the same time: working hard to make a decent living for a large family, while also attempting to be a sketcher in this world I love so much to travel around.

When I’m on vacation, away from home, I feel like a sponge imbuing itself with all that surrounds me, capturing souvenirs through quick sketches and photos, so that back home, all I have to do is to press that sponge soaked with memories and let the drawings flow.

It took me years to understand that, to manage the schizophrenic feeling, I needed to apply a strict discipline. I had to arrange dedicated time slots in my agenda to be sure to maintain what has become, over years, a vital balance for me. I also had to remove every obstacle my monkey, my inner critic, tries to put in my way to prevent me from doing so: advising me to watch a so-so entertaining TV show instead of drawing, suggesting I’d better comment on the Facebook posts of my friends. Or, as it is tonight, trying to persuade me I won’t have enough time to unpack my drawing materials anyway.

Too bad for you, Monkey! With time, I’ve become more and more minimalist and can be set to draw in less than 30 seconds. A simple Moleskine sketchbook, a pencil, and a fountain pen are enough for my happiness. And some music in the background to relax. As an echo to that minimalism, Leonard Cohen’s reedy voice is whispering a few words on a violin background on my stereo while I grab my pen. I wish sometimes I could reach such minimalism to produce no more lines than are really needed to evoke an atmosphere.

I don’t care about drawing exact reality, nor am I a great fan of frantically sketching on site (though I do it sometimes). As we say in French, I need to “Donner du temps au temps” (give some time to time). I love how time is playing a filter role, and what memories finally come to the surface.

This is how this weird pink building in Douarnenez harbor emerged this evening as today’s drawing topic. A few months ago, I was struck by this big square house lost in an unsightly modern area in the commercial port. Intrigued, I took a few snapshots of it, just in case. Strangely, looking back at my photos a few months later, I realized I was specifically looking for this very building. I love its character, which, over time, impressed my memory.

I threw a few pencil lines to be sure the volume of this tall house would properly fit in my sheet of paper, but found the building somewhat lonesome in my sketchbook. I untwisted my fountain pen, confident that I’d find a solution later on, and started to draw. What I love with drawing is that it is also a way to extend your travel experience months or even years later. And let’s be honest, while we complain sometimes about the dictatorship of electronic communication, on the other hand, it also provides us through the Internet with a fantastic discovery tool.

This is how I learned, while drawing it, that this building that struck me on top of the harbor is one of the “Abris du Marin” (Sailors’ Shelters) that were founded across Brittany at the very beginning of the 20th century to offer decent places for seamen in stopover, other than pubs filled with “filles à matelots.” (I’m sure you understand the concept of these charming and slightly (un)dressed women always ready to suggest you could offer to buy them a drink.)

I decided to remove the unaesthetic parking lot with its unattractive garbage bins and the brand new 4-wheel drive just in front of it. Then I remembered I had somewhere in my summer sketchbooks a rough sketch of an old seaman is his vintage marine jacket and pants. I decided to add his silhouette in the forefront as an evocation of the past times of this building, now the headquarters of an excellent publishing house, Le Chasse Marée (which you could compare to Wooden Boat magazine).

I tried a brand-new sepia Ink I recently bought. Unfortunately, I discovered it doesn’t dry easily. Awkwardly, I spread the ink with my palm, which gave an unexpected fuzzy effect. Though a bit disappointed, I finally decided it wasn’t that bad in this context after all. Both adjusted parts of the drawing gave the overall atmosphere I was expecting, which tells part of the story of this building.

When I closed my sketchbook, there was a strange smell of fish in the air, as if I were no longer in the sleeping City of Light.

Post Scriptum: Sometimes, I may really run out of time, in which case I simply love to revisit old drawings for 10 minutes, adding a touch of grey with a marker to highlight shadows, or enlightening a foreground with a touch of pink on hydrangeas. It’s still my daily therapy of drawing.

Jean-Christophe Defline is the CEO of an Internet company, as well as the illustrator of half a dozen children’s books. Largely influenced by French and Belgian comic books, Jean-Christophe is known for artwork depicting family vacations in the style of Hergé’s Tin Tin. Jean-Christophe lives with his wife and family in Paris, France, and he’s teaching this week’s klass in the Sketchbook Skool kourse. To see more of Jean-Christophe’s work, check out his blog, flinflins.com, and follow him on Instagram at @jcdefline.