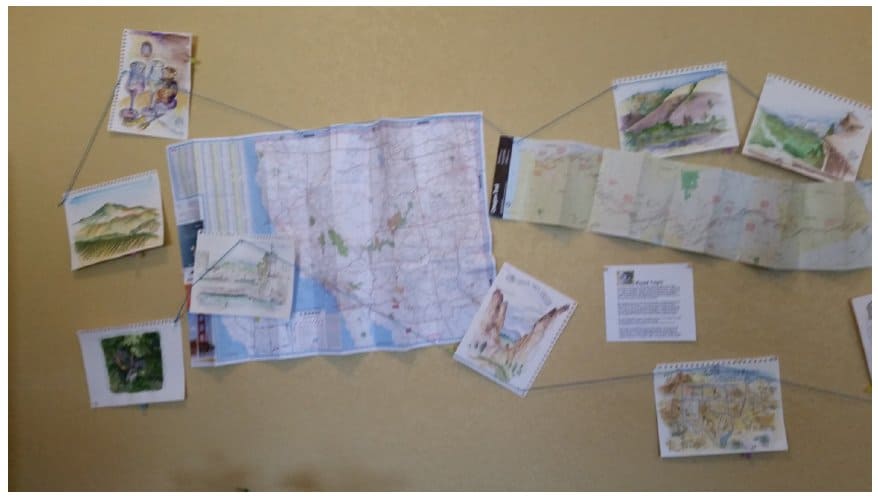 Getting it Out There: Part II

For the second part of our series* of posts about Sketchbook Skool students getting their art out there and sharing it with the world, we meet a student who wasn’t ready to exhibit frame-ready prints, but that still wanted to show off the time spent on the pages of her sketchbook.

Kerry McFall is a textile artist who chooses to share the work she explores in her sketchbooks in a very literal way; exhibiting her actual sketchbooks as works of art! See her story below.

I’ve been exhibiting my art for years (mostly textile art), everything from national touring shows which require complex packaging, to art festivals which require booths or tents that would’ve made Napoleon’s army drool, to gallery shows where OCD artists hang their work using carpenter’s levels and plumb bobs. Now my sketchbooks are my major focus because I travel a lot and they are so wonderfully portable. However, kinda makes it hard to exhibit anymore… As near as I can tell, exhibiting the sketches themselves means tearing them out (gasp – tear out? I know, but just keep reading!) and figuring out a way to hang them that doesn’t seem too cheesy yet is still inexpensive.

Two years ago I discovered the Brooklyn Art Library, which is JUST for exhibiting sketchbooks. It’s a FABULOUS place to spend an afternoon if you’re in Brooklyn(NY,USA) and you’re a sketcher. But it’s not really an exhibition space – it really does feel like a library, the shelves are filled with sketchbooks – and although you can submit a sketchbook that tours the country, it can’t focus on just YOU or YOUR GROUP, and you can’t sell anything. It’s an inspirational concept, but not what I was looking for in terms of exhibiting my work.

I’ve made several presentations to local groups about my sketchbooks and how they have become my portable studio. People love to see them, but there’s never enough time for folks to just sit and look as long as they want.

Last fall a friend approached me after one of those presentations. She asked if I would do an exhibit in her wine bar. I said yes, but with the disclaimer that we would have to invent a way to make it work… I just “hung” the show last weekend! It is a bit eccentric perhaps, and risky. But here’s how we did it, and the organization and thinking behind it.

I needed to go through my sketchbooks to choose the work for the show. I used to write in Sharpie marker on the outside covers about which trips or topics were in the sketchbooks, but it quickly became clear when I was looking for one particular sketch that there are too many volumes for that to be workable. I read one of Roz Stendahl’s blogs about organization, and decided to assign a volume number to each volume, then penciled in a page number in the corner of each page. I used those numbers to create a very simple overall keyword index in a Word doc file, shown below, which I printed and stuck in the back of each volume. This whole process took just a few hours. Bonus: now I know where to put back the torn out pages when the show is over.

I chose a few maps from one of my recent road trips, and then tore out some of my favorite sketches made along the routes shown on those maps. This was the hardest part – I get so attached to my sketchbooks. I think we all do. But what the hey, I’ve thumbed through them myself so often that they are hardly pristine! All have been photographed or scanned, I’ve been very thorough about that over time. So I persuaded myself to get over that old Quilter’s need to be sure no one touches my work without white gloves, and I just “Let It Go” like the song says!

Using plain old push pins, my friend and I hung the maps in a partially-folded haphazard accordion style on her wine bar’s back wall. Again with push pins, we put up the sketchbook pages over and around the maps, near the corresponding route which reminds me of the floor of our car during a trip! The initial plan was to attach yarn between the actual spot on the map and the sketch, but it was more fun (and easier) to just wrap the yarn around the existing pins in a kind of web or outer border.

There are four sketchbook volumes scattered on tables throughout the bar, and a few paintings are framed and on the walls. I found some “Post-It” page flags at an office supply store, the kind that are allegedly “re-positionable.” That remains to be seen, but I stuck a flag on the back of each page.

I pasted a note on the front cover of each sketchbook asking people to please be careful and use the flags/tabs to turn pages. The thought of Pinot stains does give me the heebie jeebies. The wine bar staff also knows to try to keep an eye on the books for me. It’s generally a low traffic spot, mostly just tastings on the weekends, so I’m keeping my fingers crossed.

My intention after the show is to put the torn-out pages in cellophane “sleeves” and return them to the appropriate volume. Or maybe they’ll all need to go into a 3-ring binder if they don’t stay in easily.

This was the easiest exhibition I’ve ever “hung”, and planning for it prompted me to finally come up with a way to organize some of my sketchbooks. I’m hoping it will give me the satisfaction of seeing people enjoy my sketches (what a great excuse to spend time at the bar!), and maybe it will inspire others to give their inner artist a chance. Like Danny says, “Art For All”!

Maybe the thought of exhibiting pages from your sketchbook is not your cup of tea. But this process taught Kerry a lot about her sketchbook process as well how to introduce her work to an audience of strangers in a unique and tactile way. If this method isn’t for you, think about some other ways you could try to show off your work in a similar fashion. You could give a post-it note series of drawings a try or try to scan and reproduce sketchbook pages you’re especially proud of for a display near you. As Kerry demonstrates, the possibilities of the sketchbook are endless!

*Click here to read Part I of this series 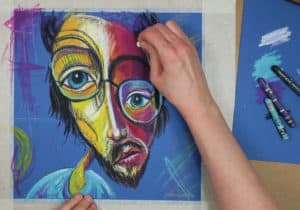 How to Find Your Art Style: 14 Rules to Guide You

You’ve heard artists talk about finding their art style, but what exactly is a signature style and how do you go about finding yours? Everyone 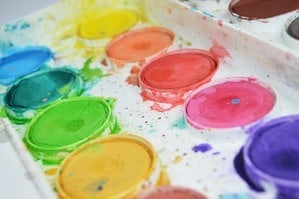 What is Gouache and How Does it Work?

Gouache painting by August Wren In preparation for our live gouache workshop on April 4, Koosje shares her knowledge on the medium, how to use 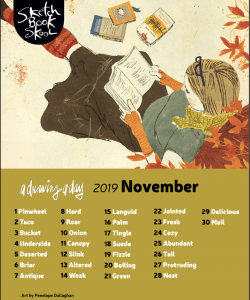 Here are the November prompts for A Drawing A Day. A daily drawing practice can unlock your creativity and help you let go of judgement