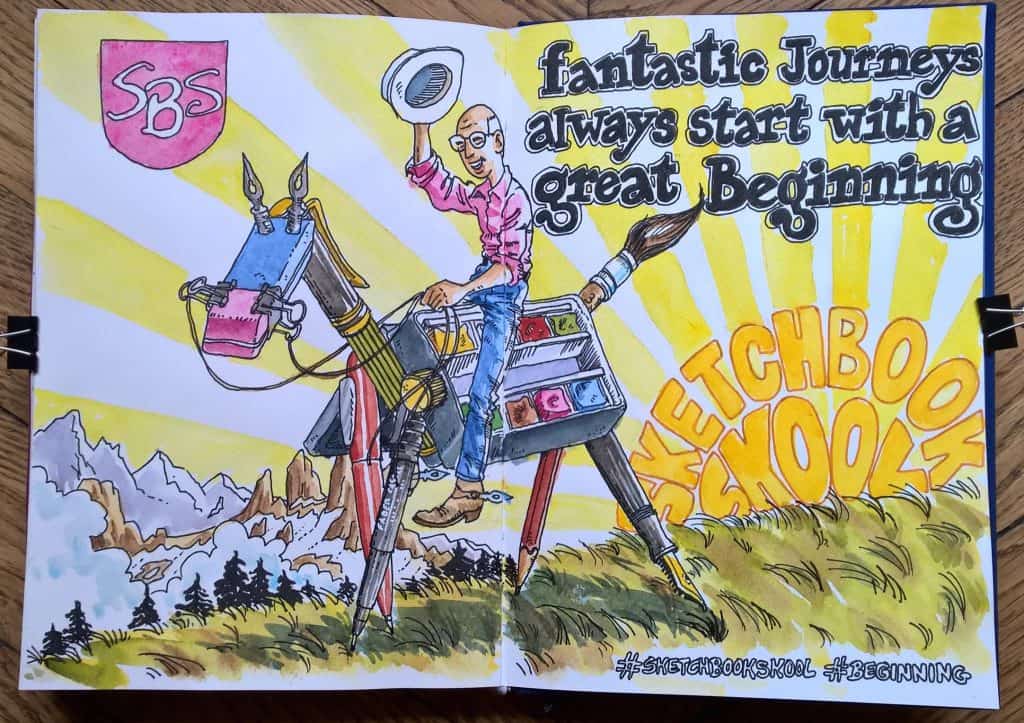 We don’t often publish long form writing here on the blog as it takes away from our time spent drawing. However, this little bit was a nice stroll (or bike ride…) down memory lane so we decided to share it.

To wrap up our month of exploring what Beginning has meant to our students, we can’t forget the impact it has had on our beloved Fakulty. Fakulty member Jean-Christophe Defline relives this vividly as he shares an inner dialogue that occurred on a rather eventful ride to work…

What does Beginning mean to you?

I remembered how I enrolled to this Klass, at the very beginning (sic) of Sketchbook Skool, without knowing exactly what I was signing for. Probably, like the 1 500+ other excited students, a lot of which have become my friends since. We all – students as well as Fakulty members – had this strange feeling of pioneering a new world, gathering people scattered all across the globe to form this cheerful crowd that welcomed every new video or posted drawing with a mix of warm and joyful encouragements, noisy sighs of admiration and enthusiastic suggestions.

Unfortunately, I had to admit this wasn’t the easiest thing to render in a single drawing, but worth trying it anyway.

Interestingly, “addictive” was the first suggestion that popped out of my mind. Sketchbook Skool is definitely an addictive thing: once you’ve started, there’s no way you can get rid of it!

“Hahahaha ! And how are you going to draw this?” asked my giggling Monkey over my shoulder, causing me to swerve, almost knocking the wing of the taxi on my left…

So, wishing him to be Uberized as soon as possible, I snuck into a traffic-jam, avoiding what seemed however a promising conversation… well…undoubtedly promising, but far less interesting that those raging debates within the Sketchbook Skool courtyard. Beyond the excitement of the weekly challenges, I also sorely missed the craze in the Beginning fray, with this outstanding sense of community and its awesome stimulation.

Maybe there was a thread here I should pull for a great drawing? “Sure! And it’s probably a feeling even easier to draw!” sneered my monkey, one more time. Thank God, at that time, I was safely stopped, waiting at the red light, though avoiding another potential accident.

(Sigh!) I love September in Paris, where everyone goes back after vacations, so relaxed! Why the heck so much anger? Is this some Pavlovian reflex, where fall reminds people of their back-to-school seasons and their spoiled youth with annoying teachers exuding boredom like an endless winter day?

(New sigh !) Fortunately, not exactly the type of teachers we had at Beginning!
(Genius Sparkle) Yes this is it ! Teachers ! Such a fine band of enthusiastic, strong and creative personalities! May be I…?

“Forget it. You’ve already drawn them all, and even more than once!” replied my monkey before I could even outline my thoughts. I was stuck in a traffic jam. Policemen had just blocked the whole road ahead of me. There was probably a high executive delegation on its way to the Palais de l’Elysée, and the whole district around my office had been, one more time, fully traffic jammed by an army of police officers in full uniform. I tried to sneak up towards the closest policeman, asking him if I could discreetly pass with my bike before the convoy arrives.

“Nope ! Stand here! The rule is the rule!” he growled.

For half a second I was tempted to tell him what he could do with his rule and where eventually put it. But, remembering my early days on Military Service, I recalled anyone donning a uniform immediately loses his sense of humor. So I carried my most hypocritical smile and decided to wait until the road is cleared.

Rules…. It reminded me I also loved Beginning because there weren’t really any rules, except Danny’s no-pencil rule, I mean.

I decided I wouldn’t give my monkey a chance to interfere in my thoughts and spontaneously decided to skip on this. Beyond the lack of rules, there were also a lot of philosophical concepts handled out, of which I could possibly write a whole book.

Still blocked in the traffic jam, patiently waiting in the line, I looked around. Close by me, there was a fabulous gleaming bike: a superb fixie, at least worth 15 000 €, with a bamboo frame, its saddle and handles in the purest peccary leather and what seemed a titanium luggage rack.

Waooow ! Nice little tool, did I think… which brought me back once again, to our endless discussions in the Beginning forum about our beloved tools: whether to draw with or without pencil, which kind of pen to buy, the most suitable type of paper and watercolor for a “Prash wash”, whose got the most comprehensive collection of Lamy fountain pens and how many irreducible persons in the group did not store their color pencils in a rainbow order.

All around me, in the congested traffic, motorbikes, cars and lorries now blocked for almost 15 minutes, started to honk like crazy. People were yelling at cops, loudly grumbling against those political leaders without scruples, who think they can get away with anything, including privatizing the street, just because they have been elected!

It was at this point that the convoy of official cars passed at full speed, all blaring sirens and flashing lights in action. The cordon of policemen abruptly opened, allowing the flow of vehicles to rush in the deserted side of the street in a stunning concert of horns, roaring engines and vociferations.

For a minute, I disconnected myself from the tumult, dreaming of a journey far away in a quiet land with huge spaces, a land cleared with every kind of troublemakers, a land of fantasy and creativity, riding the most phenomenal mount.

All of a sudden the rain stopped abruptly and the blazing morning sun broke through the cloud mass, illuminating the sky and the zinc roofs with shining rays.

I stayed for a while, standing alone on the street, watching the burning sky spilling rivers of gold on the glittering wet pavements. I didn’t care any longer about the Paris traffic jam. I knew I could escape from daily boredom at anytime.

All I needed to do was to grab a sheet of paper, stir smoothly the best thoughts, ideas and images collected in my memory and let it go. Back home, I sat at my desk, opened my sketchbook and started to draw, an evening daily habit I kept since “Beginning”.

The nib of my fountain pen was slipping on the paper, with its familiar musical screeching.

I jumped on my watercolor mount and left once again for this fantasy world where I love to travel around.

Actually, the story could have ended here, but the best was yet to come.
Once I added the very last brush stroke to my drawing, I realized I had reached the last page of my Sketchbook Skool sketchbook, the one I started more than a year ago with … the Beginning Klass !!!
As we say in French: “La boucle est bouclée” (The belt is buckled).

So I took out a new sketchbook, opened it, and wrote in a nice calligraphy “Sketchbook Skool, Opus 2.”
I don’t believe in coincidence. The other lesson, here was pretty crystal clear: Every drawing is a new beginning!

If you have yet to find your new beginning, check out Beginning at Sketchbook Skool! 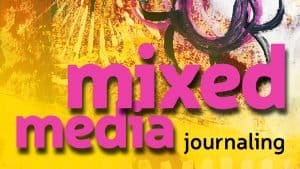 We are so excited to present these four new amazing instructors in our latest course, Mixed Media Journaling. Read a little more about them below 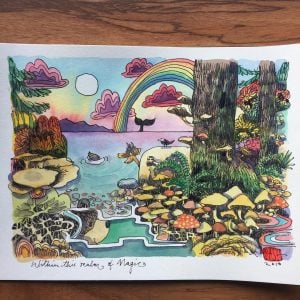 Interview: Prashant Miranda Reflects on Settling Down in Nature

JJ Gregory talked with Prashant in Pasadena, CA on the final day of SketchKon. After years of being a travelling artist, Prash is set to 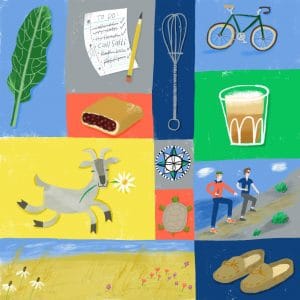 Q: You’re an award winning greeting card designer who has designed thousands of cards. Clearly you love mail! In a world where technology increasingly rules