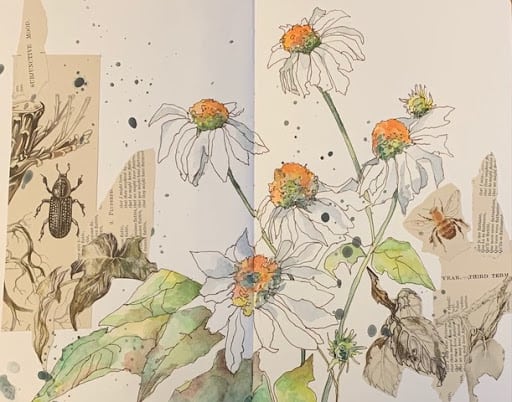 Welcome to a new series from Sketchbook Skool about what making art means in our lives, as told by members of our Spark community.

I just retired from my work as a commercial interior designer after 50-plus years. The last 20 have been especially important to me because I specialized in senior living facilities, from what we in Canada call independent living through to long-term care and care for people living with cognitive disabilities.

My husband Ken lives in one of those residences. He was diagnosed with dementia in 2015.

I came from a very creative family.  My mother was a newspaper journalist, and later a book editor. She was also a wonderful cook, with a collection of 5,000 cookbooks, all cross-referenced and cataloged! My father was a doctor, but he was also a wonderful photographer. There are photos of me when I was three, sitting at a little desk with crayons and pencils. At university, I studied theater design, and later l did a technical diploma in interior design. The work itself was creative, so art-making for pure joy went on the back burner. But I’ve always done something creative, whether designing interiors, knitting, and needlework, or making a piece of art.

In 1994 I had laser eye surgery that was unsuccessful, and I couldn’t draw for about five years. That was devastating. I needed seven surgeries to correct it, as well as training to be able to refocus my vision. When I was able to draw again, I looked around on the internet for online art programs, and I found Sketchbook Skool. You’d be engaged over a number of weeks, really learning a particular skill through a panel of artists. I thought, This is for me. My first course was Seeing, and after my experience, I really knew what it was like to see things differently!

My husband was always tremendously supportive of me, and he was so proud of my artwork. Whenever we went for a drive, he’d say, “What do you think about that to draw? You sketch, I’ll read.” Ken’s the oldest of seven, and he always put his parents and all his siblings before himself. He did take creative writing, and I tried to encourage him, but I could never get him to prioritize his creativity.

After his dementia diagnosis, Ken started writing a children’s story but only wrote a paragraph or two before he lost the ability. In the early stages, he also liked to doodle and draw. Though his short-term memory was fading, he was able to do an incredibly detailed sketch of his uncle’s cabin from a childhood memory. He can now no longer write or draw. I’m trying to complete his project for him, writing and illustrating that children’s story.

I’m also working on a story about when we met. We both worked for the same company, and we wanted to keep the relationship private, not become the business gossip. We’d leave coded notes on the windshields of our cars in the parking lot. As often happens with couples, we had cute names for each other: Ken was “Snow Owl,”and I was “Ice Chicken.” I’ve started a second children’s story, a love story, about those two characters.

We just celebrated our 44th wedding anniversary; Ken doesn’t know the significance of the day anymore, but we were able to be together. 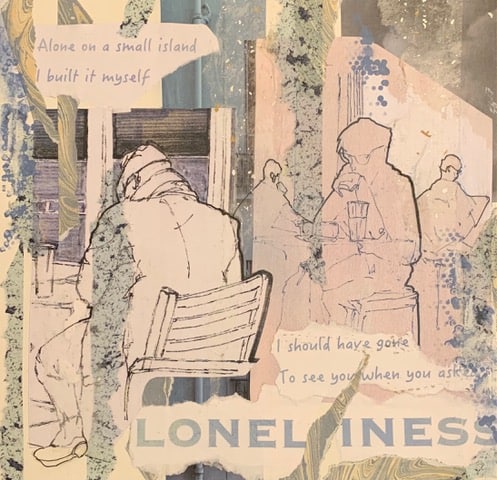 Prior to my husband going into the care facility, we had six visits to the hospital. There were frightening ambulance rides, and long waits in the ER. I always have a sketchbook with me, and for my own emotional stability, I would draw. I drew in the ICU, I drew in the ER, I drew in the waiting rooms. Since Ken has been in the care facility, I have hundreds of drawings of him, some that could be called lovely, others sad and disturbing. This is a diary of his journey, both the good and bad. Drawing can help us process and accept what happens in front of us.

Sketchbook Skool and Spark have allowed me to experience things I’ve never experienced before, using techniques I’d never tried before. I used to go on Urban Sketching gatherings and not draw the buildings, just the people. With Jedidiah Dore’s Spark classes, he’ll bring up this very detailed urban environment, and you go, “Holy cow! I can’t do that.” By the end of one of Jed’s classes, I did it! It’s about not overthinking, just diving in and doing it. I felt the same way about painting flowers until taking the Floral Fun classes in Spark. Now I have a book devoted to mixed media work with flowers, and I love it. I’m an observational artist, but classes like Saturday Morning Cartoons have strengthened my imagination.

In Spark’s Creative Goals sessions, I’ve learned to focus. On the first of every month, I write my “Creative Manifesto.” I try to keep it to 4-7 items at most. The “listing” activity has become a two-page spread, with the Manifesto set on the left side, while on the right is the “Ideas List” for the same month. While the Manifesto fixes the monthly goals, the ideas page is organic—Ideas being added, modified, or even deleted if something better pops into my head.

All this list-making does not preclude the fact that a real-life event, or an opportunity, might sabotage the monthly plan, but not necessarily THE BIG PLAN! The Big Plan is where I hope all my artmaking might lead me in the next 12 months or longer.

Another thing we talked about in Spark is trying new types of art. I always had a bias against mixed media. When I saw it in Spark, I thought, Nah, I’m not going to do this. But I tried it. Well, I was recently asked by a care facility to do a piece of art, and I did a sunflower in mixed media. It would never have occurred to me to do that if I hadn’t taken that course. I’ve also done a mandala design based on dealing with dementia. All of this is based on the confidence building through Sketchbook Skool and Spark.

Art is very funny; it allows you to have a period of escape from thoughts, and at the same time gives you another point of concentration. As time goes on and we get closer to the end of our journey, it’s about seeing life with a capital L, and art does that. My days are spent visiting my husband and helping to care for him, being my family’s historian, and making paintings that show the complexity of family. I work on everything from visual communication pieces for long term care research projects to designing tattoos for family friends, and trying out new ways of being creative. SBS Spark has been my “spark.”

Making art is an anchor. It is essential for balance in my life.

—As told to Suzan Colón