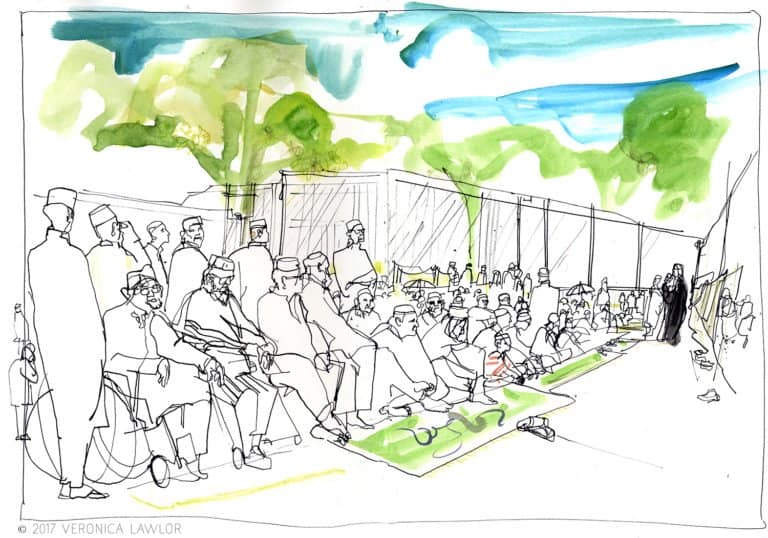 Today’s guest blog post was written by Sketchbook Skool fakulty member Veronica Lawlor. Veronica sketches on location regularly, and it gives her a chance not only to draw but to learn about other cultures. The more we learn, the more we see that we may have different ways of worshipping, dressing, and living, yet we’re all basically the same. Making art gives us this opportunity. The following is an excerpt of one such sketch outing.

My New York City neighborhood of Jackson Heights is home to a large Muslim population from Bangladesh, India, and Pakistan. During the weekend of Eid, the end of Ramadan, our local park was turned over to a Muslim prayer service on Sunday morning. I decided to walk over and draw what was happening.

The park was full of men lining up on prayer rugs in the tennis and basketball areas. The prayer service itself was fairly short, and the Imam spoke in English as well as Urdu, so I could understand some of what was going on.

There was a series of bowing, kneeling, standing up, bowing, kneeling, etc., and prayers. Then the men sat and listened while the Imam spoke to them. He told them that today was the day to enjoy good food and being with their families, and to have gratitude.

After the prayers ended, the men wished each other “Eid Mubarak” (Happy Eid) and hugged each other. It was a very sweet and sensitive gesture, and the happiness the men felt was palpable. After that, they left in groups with their wives and children to enjoy the holidays, everyone chatting and calling out to each other.

One man and his father came up to me and asked to see my drawings. As I explained what each drawing was to the younger man, he translated what I was saying to his father. I asked the man about the hugging: Was it a specific tradition, or a spontaneous feeling that made them hug each other after the service?

He told me that the men hugged each other in the tradition of the Prophet Muhammad, who “hugged his men so they could feel each other, and celebrate brotherhood.” I told him that I loved that tradition, similar to the expression of peace by shaking hands or hugging at a specific time in the Catholic service.

“Islam is a religion of peace,” he told me. “Many people don’t understand our religion… No religion wants killing or terrorism.” He paused, and touched his head: “But there are a lot of sick people out there.”

So much misunderstanding in the world. But for today, celebration, and I was happy to draw their happiness. As everyone walked off from the park, they mingled with their non-Muslim neighbors heading out to the Sunday morning farmer’s market. Different families, of different religions, all enjoying the day together.