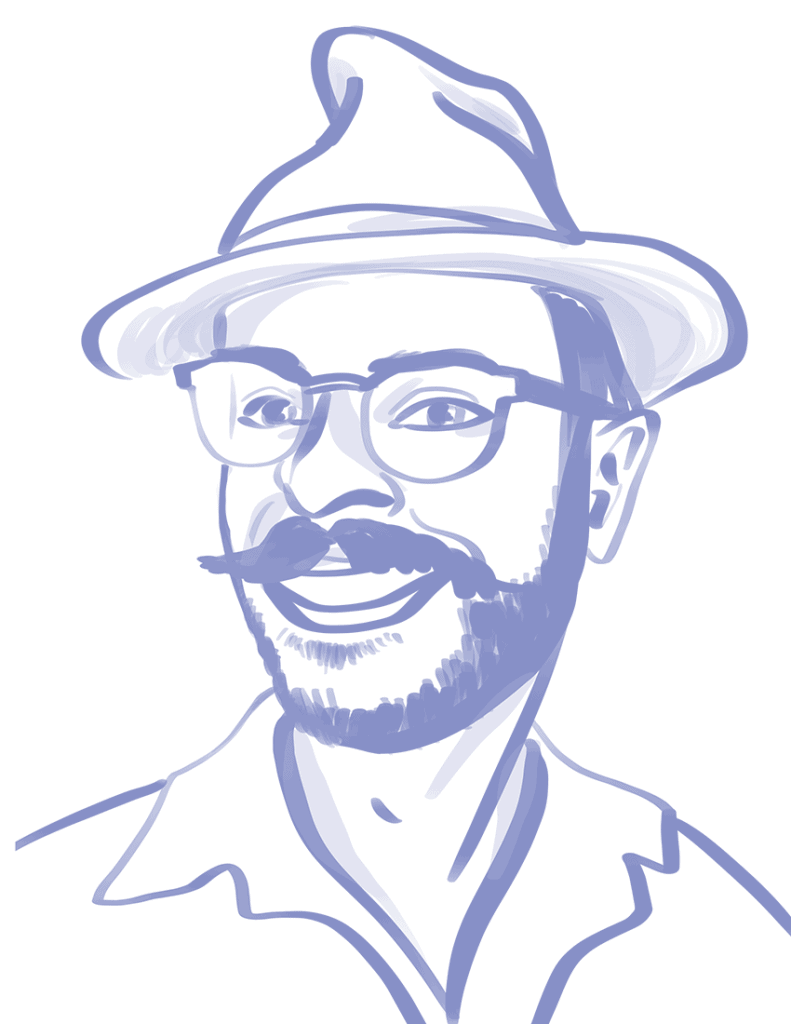 Those of you who have taken the Sketchbook Skool kourse know today’s guest blogger as the man who taught you how to paint the sky. Prashant Miranda is one of the most beloved members of the SBS fakulty because of his brilliant, beautiful watercolor paintings, his kind and gentle teaching style, and his awesome piano and guitar playing. While teaching a class in color in Ahmedabad, India, Prash wrote this guest post about traveling between his native India and his adopted home in Canada, and how the two cultures inform his art.

Growing up in India has imbued my life with a rich sensibility of ancient and modern traditions. My family comes from a lineage of ancient navigators who were converted by the Portuguese in the 16th century in India. I have a strong connection with the sea, as I was born on the west coast of South India, and quickly moved to a cosmopolitan city Bangalore, where I grew up in a Christian household. We spoke English at home and grew up playing the piano and studying Shakespeare in high school. It was after this that I studied Animation Film Design at the National Institute of Design in Ahmedabad, India, for five years before moving to Toronto 17 years ago.

Canada was all about adaptation, initially. Adapting to a new environment, climate, culture, and making new friends. The animation industry where I worked was the perfect introduction to the creative life that I needed, and the social sphere that has formed the bonds that I closely love in Canada. Most importantly, Canada introduced me to nature in a way that I hadn’t experienced before, and I had an immediate spiritual connection with that inherent culture of the country.

It was only after moving to Canada that I realized how little I knew of India, the country that I had grown up in. It felt like the world in India that I had grown up in was a little bubble in the vast expanse of that magical country. I had also felt a lack of the spiritual connection with things in Canada, being immersed in the animation industry in a relatively modern society which was dictating how I had to lead my life. So I decided to take some time off to explore India to begin to understand a little bit more about my heritage and culture.

So in 2002, I backpacked around India for 6 months, which opened up my horizons and new perspectives in this incredibly rich and diverse land. Each place I visited felt like a new country within this country. There was such diversity in geography, languages, costumes, art forms, cuisines, dances and traditions…all of which blew my mind!!! It was around this time that I was seeking to pursue my passions as an artist, and so everything that I tasted, felt, touched, smelled and saw, was soul food. It was evident that I had to make a yearly migration to touch base with my roots.

Both countries have taught me much. The summers in Canada are beautiful, and autumn is my favourite season. Nature and its colours provide adequate inspiration for my art; camping out with the northern lights and watching whales in the wild have been magical! Canada has taught me the dignity of labour, and the diversity of its people, my family and friends have made it home for me. There are many things I take for granted, like drinking water coming out of the tap, let alone hot water…and just when I get used to this, the cold winter sets in and it’s time for me to flap my wings and fly to India.

India, on the other hand, gives me a dose of reality. I have seen 3,000 year old rituals and practices nonchalantly performed that are very relevant in our current times, a devotion in faith and fervour unlike any other, sublime rural landscapes with the kindest open-hearted people I have ever met, living roots bridges, tigers in the wild, and breathtaking views of the Himalayas that leave me spellbound. There is an innate deep-rooted culture which permeates through many layers of colonization that facilitates new growth and potential. I am in love with India and it is home away from home for me.

Painting helps me travel between these two worlds, and I am ever grateful for this flexibility to work wherever I go, and the inspiration that fuels these journeys. I am a strange bird that flies between these two countries, but the journey has become easier and the magnificent beings I meet along the way and spectacular sights I see keep me seeking new horizons. I have barely begun to scratch the surface of the deep wealth of knowledge and understanding of what Canada and India have to show me, but I am enjoying every bit of what I’m experiencing right now!

Prashant Miranda is an illustrator, author, animator, muralist, and Sketchbook Skool fakulty member who teaches in our kourse. See more of Prash’s art and learn more about him on his SBS fakulty bio and his blog, prashart.blogspot.com.

Do you sketch when you travel? If so, what are your favorite sketch subjects–people, buildings, nature, food? Let us know in the comments below.